2021closing date is October 3rd (No October events this year)

Shell Island this year had on more than 3 occasions, had members of its own staff enter the water to rescue people that were in difficulty. The lives that were rescued included 3 children and 3 adults. Over the years this number is in double figures.

In one of these instances, a member of the staff swam out twice directly into the riptide to help

On another, 1 member of staff swam out to rescue a person that had re-entered the causeway flood water, to get belongings out of is car after it was submerged. He got into difficulty in a force 9 gale with a Spring tide. Another member of staff assisted in a dinghy, travelling ½ mile in this storm, traveling against 4 feet waves. This was in total darkness for both of them.

We know that this year there has been both locally in Barmouth, but also nationally, a huge rise in people tragically dying in the sea, whilst spending a day at the beach.

We have identified a potential risk due to staff entering the water and putting their lives at risk, without a thought to their own safety and have found a safer and much faster way to help people in danger in the water at their time of need.

As Shell Island is situated in the middle of 2 RNLI lifeboat stations and between 2 HM Coast Guard stations, we know that the average time for both of these valuable rescue teams to get here is approximately 15 minutes. 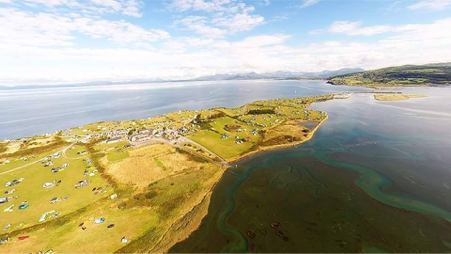 We are proud to announce that the UK’s first E.M.I.L.Y (Emergency Integrated Lifesaving Lanyard), will be on station here at Shell Island for the remainder of the season.

Capable of being deployed anywhere onsite in minutes, and with a top speed of 20mph+, if she gets used in a rescue situation, it will give the casualty the buoyancy to rest, whilst waiting for the RNLI, but also a lifeline to shore where they can be pulled in on the recovery system that she uses (800 feet rescue line).

She will also be available out of our camping season, should there be any requests from the rescue services, in any future flooding in towns etc. across the UK.

She will be on station here at Shell Island from the 15th of September. She will be available for a static display beforehand, and in the afternoon we will demonstrate her in the water of what she is capable of.

She is arriving with her designer, Anthony Mulligan on the 11th September in London, also accompanying her is Los Angeles Senior Chief Lifeguard, that has 3000 lifeguards under him, operating these on a daily basis in rescues.

The 12th will involve training and maintenance for 2 of our staff at a hotel in London (the two who keep going in the water to rescue people), and on the 13th with her on the water somewhere in the London area.

On the 14th, she will make an appearance at the press conference at Tower Bridge on the Thames, where she will be shown in action in the water, in front of the UK media that have been invited by Anthony Mulligan, who will also be showing 2 other models, one which has side scan sonar, so you get a live bottom video of the river or lake that it’s on. Hydronalix has also inviited the RNLI, HM Coast Guard, Lambeth Fire Brigade Borough Commander, Transport for London - River Services and Thames Auxiliary Marine Service to this demonstrations. Any other rescue services wishing to attend may contact Hydronalix direct on the website detaiuls below.

We are then going to progress the training to other members of staff onsite when we get back to Wales, with our aim to get 10 members of staff trained in using her, a bit like a defibrillator. 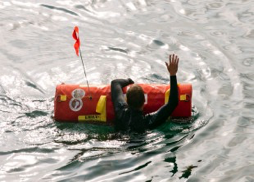 Should you need any more information or would like to visit on the day in question here at Shell Island,  phone us direct on 01341 241453.

© Copyright Shell Island | VAT no 161-2598-65 | Shell Island is a Families and Couples Campsite.
We do not accept Single Sex groups / Groups, or Youngsters camping by themselves without parental supervision.